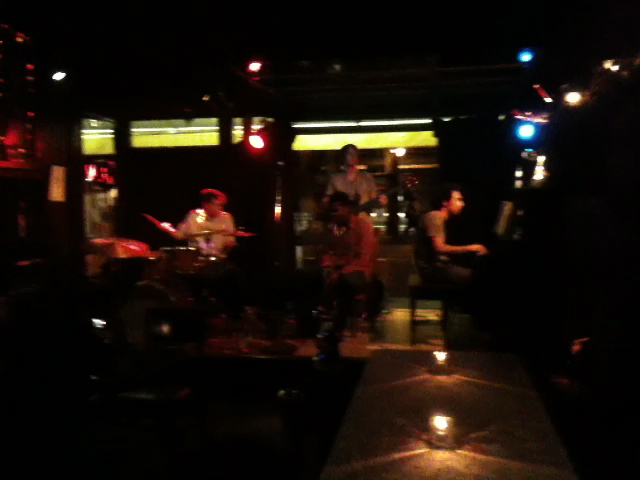 During the whole Gridlock process there have been many highlights:

Douglas Wadle doing his best impersonation of a Baptist Preacher in “Insomnambulations: Preachin’ Aphasia” and Matt Barbier tackling some of the toughest trombone rep in the world.

Vinny Golia reuniting with Dylan van der Schyff and Clyde Reed and picking right up where they left off almost 20 years ago.

Andrew Tholl playing “Koan” by James Tenney in Vancouver for the first time since he passed away four years ago.

These were all great moments and each of them represents what is at the core of Atrux (community, collaboration, education and great performances) but I think my personal highlight of this entire crazy endeavor came during the last show of the series.

Joshua Van Tassel (otherwise known as the drummer in our “Band of Awesome”) had gigs scheduled in Toronto and had to miss the second of two shows at The Libra Room. With Clinton, Graham and Josh Charney set to perform as a trio we weren’t too concerned about a small line-up change.

However, we hadn’t anticipated how quickly word gets around in this town.

Apparently the crowd at the Libra Room liked Mr. Van Tassel as much as we do and spread the word that the whole band would be back for another night and a second show.  The surprising thing about this is people actually came out to see them! (This is no small feat for a show in Vancouver).  Luckily our audience (like most Canadian crowds) was understanding about the line-up change.

One of the audiences members though, did have us feeling a bit guilty about sending Mr. Van Tassel back to Toronto.  Jonathan (a 16 year old high school student from London, Ontario) showed up eager to find out if the “Band of Awesome” lived up to the hype.  A drummer in his high school jazz band, Jonathan (or “The Kid” as he was quickly and unoriginality nicknamed) planned his whole Vancouver trip around visiting family and watching jazz.  Clinton and Co made up for him missing Mr. Van Tassel by calling him up onstage to sit in with the band.  The Kid was a hit with the crowd and a great reminder to all of us that music can be just as fun now as it was when we were just starting out.

The lasting image of Gridlock 4.0 for me is a simple swing tune that saw a community expand, new relationships solidified, a drummer for Atrux in London, ON and a great story for The Kid of that night at a jazz club in Vancouver when he got to sit in with the band.

I have a feeling this will always be one of my favourite Atrux stories and I’m looking forward to the next time Jonathan gets to play a show with us.

For more photos of “The Kid” check us out on Flickr