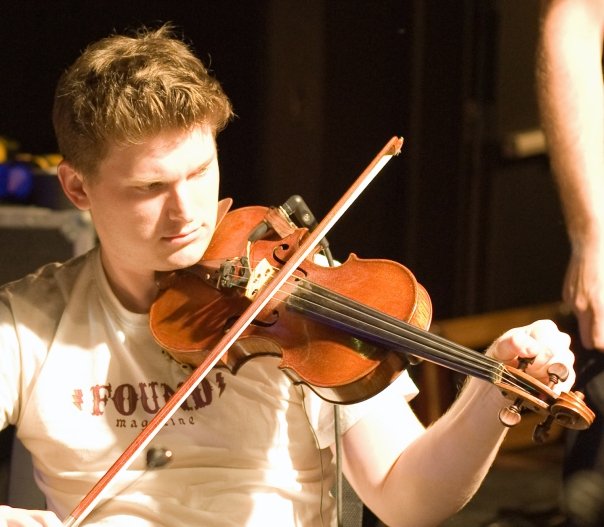 Andrew Tholl should be a rockstar.

Actually, honestly, he kind of already is.

I first met Andrew in my second year at CalArts when he was literally introduced to me as “The New Violinist”. I perked up instantly (violinists were hard to come by at CalArts) and he had that clean-cut (he hadn’t started growing out “the hair” yet), glasses wearing, “serious musician” look (I later realized that he was most likely just cranky because he hadn’t yet had a coffee) that was somehow both intimidating and intriguing at exactly the same time. I was always looking for new performers, so Andrew was an exciting new possibility, and I started thinking about how I could use him in a few pieces I had written the year before.

Then I heard him play. It was the first concert of the year for the Formalist Quartet (of which Andrew is a founding member) and they did something by Shostakovich, one of the quartets that I can’t remember now, and watching them I realized that Andrew was a player. Not in the traditional classical sense (though he has technique and tone to spare). He was just such a dynamic presence on stage and brought this vibrant energy to the music: I couldn’t look away.

I quickly realized that Andrew was able to take anything and make it sound like it was his. He played his version of Shostakovich and made me believe it. When he started performing his own music towards the end of that year, he brought to it all the things that make him such a great performer. Things like energy, creativity, individualism and a physicality that redefines many traditional ideas around performance practice.

One of the things I love the most about Andrew as a performer/composer is that he has really been able to merge the two facets of his musical identity. That energetic performer is the same composer who reminds his musicians that music is physical: Your performance is a physical act.

As a composer you sometimes forget about certain physical properties of the musicians you write for, like that common rookie mistake of forgetting to leave room to breathe. Andrew takes that that idea a little bit further and finds a way to let musicians really play with everything they have, and he does it in a way that doesn’t force them to work outside of their training. He is the kind of composer that makes his performers better. This is what makes him the kind of performer that every composer wants to work with.

I have been writing Andrew a piece for 3 years. Mainly because I can’t just write him any piece: it needs to be his piece. When you have a musician that can give you an actual performance, it changes everything. Andrew is that kind of musician and composer.

He’s Atrux’s resident rock star and we wouldn’t have it any other way.

Andrew rocks out in VanCity as part of Gridlock 3.0